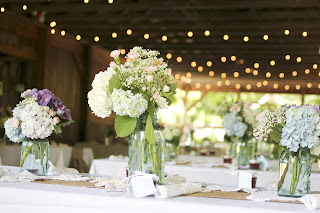 Congratulations! You've gotten engaged, and now it's time to plan your big day. Maybe you've already got your dress or tux picked out, your wedding party outfits bought, your ceremony planned, and your "Save the Dates" mailed out. Or maybe you're just getting started! Either way, it's time to start thinking about wedding centerpieces.

Centerpieces can set the tone for the entire reception. Maybe your wedding is a casual outdoor event, with bridesmaids and guests in sandals and long reception tables set out under shade trees.
Maybe it's more formal, elegant and classy, with round guest tables arranged in a banquet hall and set with china.

Maybe it's even something more unique, custom-tailored to you and your partner and bursting with all the flair that makes you the couple you are. Whatever your dream day looks like, the centerpieces will instantly set the stage.

But how do you choose the right arrangement to make your wedding picture-perfect? Below are eight gorgeous ideas for centerpieces that use real flowers. From bold to delicate, these arrangements will add the perfect splash of color to your day!

In the summertime, nothing seems to brighten things up like fresh citrus. This beautiful centerpiece can feature whole lemons tucked in with yellow roses and white hydrangeas. For a summer wedding, especially one that is to be held outside, the beautiful pop of these colors is going to be the perfect refreshing touch.

Throw in some oranges or grapefruits for a fun array of color. Consider serving lemonade or citrusy desserts to match the decor! Your guests are sure to appreciate the bright addition to the day.

Roses are the flower of love, and white roses are a symbol of purity. What better message to celebrate at your wedding than one of pure love? White roses can be a classic, beautiful addition to your celebration. These can be the perfect accent to a winter wedding.

Arrange them in bouquets, or for a more reserved effect, place single stems in smaller vases along the tables. Mix in a few red roses for a pop of color. However you choose to present them, roses will bring elegance and grace to your day.

For a spring or summer wedding, a garden theme can be absolutely lovely. Lots of flowers may be in bloom all around, and if your wedding reception is indoors, there's no reason to leave the natural beauty outside. Use garden-inspired centerpieces to bring a breath of fresh air into your reception.

Garden roses, eucalyptus, and other seasonal flowers and greenery will make your reception as naturally beautiful as a springtime flower bed. Use wooden boxes to add that extra organic touch. Your wedding will be transformed into a garden every bit as lovely as your relationship.

Fall weddings can be stunning, with rich jewel tones and the trees putting on a magnificent show. Your centerpieces should have all the same dramatic beauty. Sunflowers, red roses, yellow lilies, and bold greenery can turn your reception into a harvest-time spectacle.

Display your centerpieces in whimsical pumpkin bowls, or use plain clear glass and allow the dramatic colors of the flowers to take center stage. Whichever way you decide to go, you and your guests will love the vibrant decorations.

Succulents are rapidly becoming a cool new way to add unique texture to your wedding. They come in a dazzling array of shapes, sizes, and colors, and they require so little in terms of soil space or care that you can make arrangements with them that seem to have been lifted straight from a fairy garden.

Arrange them around an orchid for an almost ethereal effect that will wow your guests. And best of all, since succulents can be living decorations, you can give them as party favors to your guests when the celebration is over! Get adorable little terra cotta pots or glass domes and invite your guests to take home a floral friend.

Calla lilies are a showstopper of a flower, with their long stems and bell-shaped blooms. And if you're going for the ultimate impact, it's hard to beat deep purple calla lilies. If your wedding is glamorous and elegant and your reception needs to have every bit the same amount of drama and flair, this might be the centerpiece for you.

Use tall, clear vases to draw your guests' eyes upwards. Or consider arranging the flowers in bowls for a more extravagant display of the fluted shapes and many hues that these flowers come in. The only thing that could steal the show from these flowers - is you.

If your wedding is a soft, delicate sort of beautiful, your centerpieces should be as well. Roses, carnations, hydrangea, lisianthus, eucalyptus, and willow in gentle pastels can lend an air of tenderness to your reception.

Arrange the flowers in a clear glass bubble bowl for a rounded, natural effect, or use light wood containers to make a bit more of a statement. Your reception will be as gently gorgeous as your wedding.

If your wedding needs color and rainbows are the only things that will do, this is the centerpiece for you. Orchids, carnations, roses, and more in a beautiful ombre of color bring a definitely fun tone to your reception; you can even throw in some lavender and hydrangeas to bring in the cool color spectrum. With a centerpiece as fabulous as this, your reception is absolutely guaranteed to be amazing.

No matter what your perfect wedding looks like, having the right flowers can take things to a new level of beauty. Bold and bright or simply elegant or wonderfully unique, your centerpieces will set the tone for your reception.

Find your perfect centerpiece at Peachtree Petals. They deliver local same-day flowers, and each arrangement is sure to wow. Get in touch with them to start making your wedding as beautiful as your marriage will be.
Posted by Lisa Bevan at 11:03 AM 0 comments

7 Congratulations Flowers That Are Ideal for Different Occasions 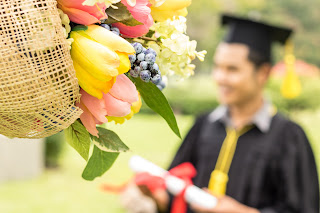 Did you know that each different type of flower is representative of certain emotions or feelings?
Maybe you've recently been invited to a graduation party or a baby shower. Or perhaps you want to simply congratulate a friend or loved one for achieving a new milestone. What to bring?
Congratulations flowers are just what you need. But staring over so many different bouquets can be overwhelming. Which flower or bouquet will really get the message across?


Congratulations Flowers Can Say So Much

Now you just want to be sure they're saying the right thing!

Below you'll find seven different occasions along with our recommendations as to which flowers will give the message you want to deliver.

Say congrats for landing that new job with:

Daffodils are sometimes referred to as Narcissus. That's because the ancient Greeks believed that the flower originated from Greek God Narcissus who couldn't get enough of himself. And that may be.
But with their bright and happy infusion of yellow into the early spring, there's no flower that says new beginning and rebirth like the daffodil. And a whole bouquet of them will leave anyone feeling encouraged.

Even if you don't go with a big bouquet, be sure not to give just a single bloom. Rather than rebirth and new beginnings, a single bloom represents misfortune.
And nobody wants that negative energy for their new job!

Celebrate the happy new couple with:

Known more commonly by their shortened name, the mum represents joy, optimism, and wishes for a long life.

In fact, the mum with its boldly colored flowers in reds, oranges, yellows, and purples is symbolic of the sun in Japan. It is celebrated there every year with a happiness festival.

With all of the positive and cheerful energy they exude, what better flower to give a newly engaged couple getting ready to embark on a long journey together?

Acknowledge this amazing milestone with:

With their ruffled softness and subtle scent, carnations are almost a metaphor for a new baby. And they're one of the most traditional congratulations flowers.

And while another option is the daisy - which also represents new birth - more and more people are choosing the Gerber daisy instead.

You get the new birth symbolism of the daisy, but with a wide variety of colors so you can pick the perfect color combination. Plus, the Gerber daisies are priced to please. They're a win-win.

Yeah, there are all sorts of traditional gifts to give the new homeowner. But do you think with all of those boxes to unpack, they really want more stuff?

Giving the new homeowner a bouquet of sunflowers and/or roses in playful hues will give an as-of-yet unadorned room a splash of color. And maybe some nice fragrance too.

But if you're still feeling guilty about not giving them a lasting gift, then consider a plant. An orchid will do an equally terrific job at bringing some color to a new space.

Or try some fresh herbs to brighten up the kitchen and the future meals that will be cooked there.
You could even go with a three-stalked bamboo wrapped in red ribbon for good luck.

Recognize a job well done with:

The hydrangea has a complicated history. In Japan, it has long been linked to appreciation and gratitude. And modern-day Japanese florists use pink hydrangeas to represent genuine emotion and love since they liken the flower's appearance to a beating heart.

The Victorians had a different take. They felt that the longevity of the hydrangea blossoms were representative of someone who was prone to boasting and bragging.

These days the Victorian angle has been cast aside in the West and the hydrangea has come to represent appreciation and gratitude as it has in Japan for millennia.

This makes it an ideal flower to express that appreciation and gratitude for one who has served in his or her job for a long time.

Get that grad a congratulations bouquet by:


Following the Theme of the School's Colors

This one is less about symbolism and more about just having some fun with those congratulations flowers!

Giving flowers that match the school colors will be a lot more challenging for some than for others.
For instance, if the colors are red and white, you won't have much trouble. But what about blue and green?

You could start with some blue iris interspersed with Irish bells. Or deep blue delphinium with chartreuse zinnia.

If it all feels too intimidating, just ask a florist for help. He or she will be able to provide you with the exact colors you need.

One thing you need to know about celebrating anniversaries with flowers is this:


The Type Depends on the Years of the Anniversary

Where the graduation bouquet steered away from symbolism, the anniversary bouquet is very specifically connected with it.

Whether you're congratulating your coworker for seven years on the job, or your best friend celebrating her 14th anniversary, there's a specific flower for that.

Below is a comprehensive list of the appropriate flower for each specific anniversary.
You can also impress everyone at the anniversary party by sharing your knowledge of the exact flower and what it symbolizes.

In the meantime, you'll be extending your congratulations to your friends and loved ones with a deeper meaning underneath. And that's some powerful stuff.


Say Congrats with Some Amazing Blooms

Let them know how special they are with a bouquet of congratulations flowers that is truly from the heart.

We hope this article helped you get started on picking the right flowers for the right occasion.
Just remember you can always enlist the help of our professional florists to find just the right match of flower for the occasion. Contact us today. We're happy to help!
Posted by Lisa Bevan at 12:06 PM 0 comments